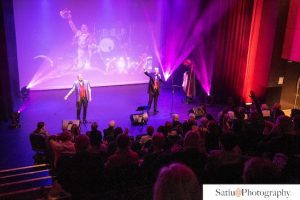 After sellout shows on the Gold Coast and Brisbane and the Wynnum Fringe Festival, the boys are back for wonderful Morning Melodies performance you will never forget.
TenorUs, A new force in entertainment brings together two of Australia’s best and most recognised and beloved tenors. Former Ten Tenors star, Roger Davy will partner with international singing sensation, Adam Bartlett to bring you a smorgasbord of swing, rock, light opera and Broadway classics.
The show features a smorgasbord of musical gems including tributes to Queen, Buble, Boccelli, Elton John, Billy Joel, Neil Diamond and much more.. along with some of your favourite Opera anthems and some Broadway classics.Audience participation, interaction, singalong and magnificent Italian cuisine you can be sure that there will be audience participation galore as this talented duo entertain you with singalongs and more. Calls for encores guaranteed.
“People are raving” Check out TenorUS recent review
https://www.theatrehaus.com/…/tenorus-in-concert…/
Performance 2 x 40 mins with interval:
Car Parking available near venue
Contact tracing upon arrival.
Roger Davy: Tenor, Roger Davy is a well-known face in Queensland and across Australia. He began his music career as a boy soprano before performing with Opera Queensland & Opera Australia. After performing in the UK and Europe then returning to Australia, Roger sang and was a driving force behind the much-celebrated Ten Tenors. Roger created Vavachi Entertainment. Producing entertainment for Weddings Corporate and Ultimate Opera Experiences, Vavachi has provided performance opportunities to countless numbers of Queensland singers, including some who have since gone onto established National and International careers.
Along with his solo performances with Vavachi, with his unique trademark performance tributes, to the man and his music “Pavarotti Forever” along with Phantom of the Opera and the Singing Waiter, Roger is now making a name for himself in Asia. Along with regular performances at the Singapore F1 Grand Prix for five years, Roger has established his reputation as one of Asia sort-after classical corporate performers. Roger has also performed concerts in Guangzhou China and New Delhi in India and has recently returned from six months performing at the Venetian Casino Macau/China. Recently performed the role of David at the Brisbane Powerhouse as part of the Restrung Festival with the Chamber Opera “The Aqueduct”. Roger performed the principal role of Piangi in Savoyards Queensland premiere production of Phantom of the Opera and recently performed with the Ipswich City Orchestra as the lead soloist in a charity concert for the bushfire appeal.
Adam Bartlett: Completing this ‘Tenorlicious’ duo is star musical performer Adam Bartlett. In addition to John Frost’s South Pacific and Simon Gallagher’s The Merry Widow and A Funny Thing Happened on the Way to the Forum. Adam performed for Brisbane Festival in Kiss Me Kate and took on his dream role as Jean Valjean in Les Miserables. In Brisbane, Adams had a standout feature role as Dan in “Next to Normal” at The Brisbane Arts Theatre and “Love Letters of Noel Coward” and co-produced and starred in the production of Piano Men “a tribute to Elton John & Billy Joel” for Footlights Theatrical. Adam’s love for theatrics and passion for song and dance make him a well-rounded and seasoned performer who can lend himself to many diverse roles. His entertainment factor is second to none and always a crowd-pleaser.